The Western Guard is a movement dedicated to preserve and promote the basic social and spiritual values of the White People.  Under the symbol of the Celtic Cross, we fight for our Christian moral values, our European heritage, and the spiritual and cultural rebirth of our people. 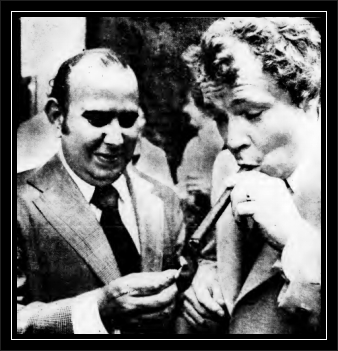 Reds at Toronto City Hall — Smoking a Salute to Castro
Cuban consul Manuel Rubido lights a Cuban cigar for Mayor David Crombie to celebrate the 20th anniversary of Fidel Castro’s attack on the Moneada barracks in Santiago, Cuba.  The attack failed, but from then on, Castro’s guerrillas were called the July 26 movement.

The time has come to take a good look at what is happening at Toronto City Hall, and at the people who are in charge of formulating municipal government policy.  One quickly arrives at the conclusion that we are run by a motley crew of leftist Marxist eggheads.  These self-righteous / all-purpose holier-than-thou know-it-alls turn out an endless stream “of collectivist schemes to foist on the “people”.  They never stop telling you they are for the “people, people, people”.

At the slightest sign of opposition to their collectivist panaceas for the “community”, they rant and rave like spoiled children (whose mental level they represent).  Of course they do not carry communist party cards because after all then the voters would not elect them (The official Communist Party of Canada candidate finished last in the mayoralty election far behind the WGP [Western Guard Party] candidate, Mr. Don Andrews).

Moreover, our leftist aldermen view the card carrying brand of communist [as] too rigid, doctrinaire and old-fashioned in comparison with their own “relevant” and “innovative” brand of Marxist “power to the people” (meaning power to their own noisy, ideological, patronage-grubbing partisans.  As for the “people”, referring to the apathetic general public, they couldn’t give a damn).  Hence these aldermen belong to numerous other parties to derive mutual benefit from association under a party label with other self-seeking opportunists.  Mayor Crombie, for example is in the Progressive Conservative Party to exploit the votes of the naive who assume their vote is going to a responsible “conservative” who will oppose them long-haired, dirty, blue-jeaned, feet-on-the-desk urban guerillas of the John Sewell ilk.

The rot at city hall is aptlv symbolized by the U.N. flag flying there expressing desire for one-world government — a planet of race-less, faceless, coffee-coloured, mongrel automatons on Chase-Manhattan’s consumer plantation.  When one considers the present Afro-Asian immigration invasion turning Toronto into the race-mixing capital of North America, one sees the progress of this Marxist vision.  The reader is asked to keep in mind throughout the review of city council that there is not one elected member of the municipal government who is not a RACE TRAITOR, regardless of whether that implies the active anti-White activities of the socialists, or the sheepish submission of our nation-building racial stock by the “OLD GUARD”, who would tremble at the prospect of being accused of “insensitivity” to black peoples’ needs, let alone “racism”.  Yet if a referendum were held as to whether Torontonians desired non-white immigrants there would be overwhelming opposition to any Afro-Asian immigration.  Therefore this submission represents a distressing abdication on the part of the Whiteman who meekly complains behind closed doors of our city “going to the dogs”.

Metro Council spends endless debate on improving the quality of life and preserving neighbourhoods by stopping expressways, high-rises, street widenings, etc.  Yet as the crime rate soars and citizens are afraid to use their streets and subways after dark not one word is spoken in City Hall concerning the suicidal practice of introducing an alien, unassimilatable coloured minority into our midst.  All this after history’s irrefutable evidence that their blood has never improved the quality of life anywhere, that they have never created nor contributed to any high culture in human history, let alone the U.S. experience that coloureds per capita commit eight times more violent crime than Whites (This fact was borne out by FBI statistics prior to 1963, the year that the U.S. courts declared that classifying criminals by race was unfair to negroes).  By serving as unanimous party to this Afro-Asian invasion of Toronto, it is the entire lot of race-traitors that must be swept out at the next election, whether their label be reformist, socialist or Progressive Conservative.

Last month, the mayor of this city had the nerve to ask the aldermen to stand for one minute’s silence on behalf of the dead Chilean Marxist Salvador Allende.  Of the aldermen present only two did not stand, Aldermen Beavis and Ben.  The municipal politicians on behalf of the people of Toronto signed a Marxist-oriented position urging the Canadian government not to recognize the new junta and to provide asylum in Canada for fleeing reds.  The aldermen signing this traitorous piece of garbage were Aldermen Chisholm, Goldrick, Heap, Jaffary, Sewell, Kilbourn, Johnston, and Thomas.

In addition to hiring several campaign hacks at substantial salaries at the taxpayer’s expense, our mayor has seen fit to further insult the intelligence of the Toronto electorate by seeking to implement a ridiculous by-law that there should be no buildings built higher than 45 feet in the downtown area. 1  Although the WGP has no love for the money-hungry developers, we see this as nothing but a power-hungry move on the part of the mayor and his lackies to stop growth and progress in pursuit of his fuzzy-brained socialist utopia.

Mayor Crombie is also in the habit of welcoming such leftists as Cesar Chavez, leader of the California Grape Boycott and lending the influence of the mayor’s office to further the ends of Chavez’s Marxist-led union.  Were Chavez to try a grape-pickers strike in his racial homeland Mexico, he would have been jailed and/or shot for trying to move in on the power structure of the local dictatorship and the government-censored press wouldn’t mention a word.  Incidentally, the agricultural wage in Mexico is two dollars daily, far below the hourly rate in California.  Nevertheless, our “Progressive Conservative” mayor bought Chavez’s story of gringo oppression in California.

July 26th is the day Communist Cuba celebrates as the start of their revolution, the date Castro first attacked the army barracks.  To celebrate this communist triumph, Mayor Crombie lit up a Cuban cigar offered him by the Cuban Consul, one Manuel Rubido.  (Is “Rubido” the Spanish Castillian transformation of “Ruby”?  See cover.)

The most damage to the city and to the dignity of the council has been done by the Ward aldermen, Sewell and Jaffary.  If they could have it all their way, we would be living in communes by now.  Alderman Sewell went as far as to suggest that we hire community organizers at the taxpayer’s expense.  This punk shows his contempt and disrespect for the council chamber by coming in dressed like a mutilated scarecrow and repeatedly putting his feet on the table.  One of Sewell’s most faithful lackies is Ward 6 alderman Dan Heap.  Heap goes as far as to write for the communist rag Guerilla.  Recently, Heap was arrested for causing a disturbance on the picket line at the strikebound Artistic Woodwork Plant in North York.

Incidentally, the strike there is not over wages, fringe benefits, or working conditions; rather, it is over a management rights clause in the contract allowing management to fire incompetent and lazy workers.  Management rights were never an issue until recently at this industry founded after the war by Estonian immigrants.  In the past years, there has been a massive turnover in their labour force, as the majority are now immigrants from the Caribbean and from Latin America.  As the efficiency and quality of work plummeted, management was guilty of the crime of trying to give the lazy non-White immigrants the choice of working up to Canadian standards or being fired.  In Alderman Heap’s Ward Six, the negroes and latinos constitute a powerful potential bloc vote that Heap is out to pull in by his antics.

Another race-traitor to have seen picket line duty is the city council’s oldest hippie, Ward 10 Alderman William Kilbourn.  A WGP government will send negroid and latino immigrants back to the street corners of Montego Bay, Port of Spain, Guayaquil and Lima to search for jobs at two dollars a day.  At the same time, self-respect and the dignity of working to earn one’s keep will be instilled in White Canadians who have opted for the moral degeneration of Welfare parasitism.

Before concluding, we might point out that Ward 9 Alderman Dorothy Thomas is presently attending a Marxist peace congress in Moscow along with other Marxist “peace” buffs.  Simply meaning, the scope of our municipal politicians elected to represent the wishes of the electorate on speed limits, zoning by-laws, parking restrictions and other local concerns.

In next year’s municipal elections, the public will have the opportunity to sweep this human garbage out of City Hall by electing a WGP administration.  The WGP does not hang up whatever ideological flypaper might trap the greatest number of votes at a given time.  We stand unequivocally for putting the interests of WHITE PEOPLE first, i.e., the interests of the European racial stock that built and gave character to this nation.  An absolute end will be put to the pandering to non-White unassimilatable minority elements of Afro-Asian stock.  The WGP will work for their repatriation to those parts of the world where their kind is in the majority.  We are sure they will be happier without Canadian racism.

1 Ed NSIM:  Let me hazard a guess about the 45-foot-height limit for downtown buildings.  Under Communism, private enterprise is abolished.  No need for office towers.  These reds in the Toronto City Hall in the early 1970s were so convinced Communism is coming to Canada, they were planning in advance to limit the architecture, since high-rise office towers would be difficult to “re-purpose”.

Also, under structural Communism, cities — expanded and consolidated metropolitan “regions” like the 1998 Toronto megacity created by the Mike Harris government of Ontario — become the new “power” centers with a focus on socialist planning.  These Marxist goons with their feet up on the office tables were expecting to become the new happy lords, as provincial legislative powers and resources would be devolved (“redistributed”) into their hands. 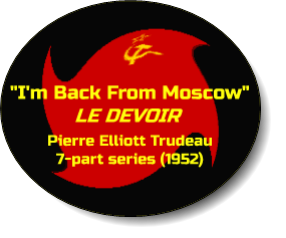 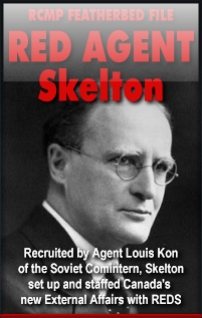