I put this bio together in July 2015, and just discovered it still unpublished in my xammp version of wordpress.

As the title says, it’s a short overview of Elizabeth Bentley’s life and activities.  Much more needs to be added to give teeth to her credibility as a defecting agent of Soviet military intelligence and a member of the Communist Party who turned herself in to the FBI in 1945.

I know the materials to do that are out there, because I read them long ago. I need to do research to find them again. So, in the meantime, here’s a good intro to Bentley, with my sources listed at the bottom.

Whenever I update this bio, I will do it right in the present text and leave an “UPDATED” notice at the top. 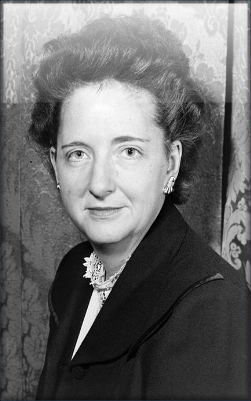 In the late 1940s, Elizabeth Bentley, then aged 30, appeared in cross-country headlines while she testified before the House Committee on Un-American Activities during numerous investigations of alleged communists.

Disregarded by some at the time as an attention-seeking and relatively insignificant figure, “something about her,” claims her biographer Kathryn Olmstead, “touched the fears and fantasies of postwar Americans.  Her media image revealed Americans’ concerns about gender relationship after the upheaval of the war.  Her story became interwoven with the cultural, as well as the political, history of the Cold War at home.”

I don’t understand what Olmstead means by “gender relationship” here; Bentley was intimate with her superior in Soviet Intelligence; Bentley was a female in a power role, perhaps at a time when women weren’t expected to be.  But, anyway, let’s move on.

Indications are that this image persisted.  At the time of her death in 1963, The New York Times claimed:

“the disclosures and accusations by Elizabeth Bentley and Whittaker Chambers helped to set the tone of American political life for nearly a decade,”

and in 2002, The Wall Street Journal declared that Bentley’s testimonies:

“started a chain reaction that would transform American politics and culture.”

Similarly, as a pivotal news-maker, Bentley represented a public face of Vassar College at a tense and crucial national historic moment.

Bentley was born in 1908 in New Milford, CT, to Charles Prentiss and Mary Charlotte Turrill Bentley.  In 1926, she won a scholarship to Vassar, where she majored in English and minored in Italian, graduating in 1930.  Of Bentley’s time at Vassar, Kathryn Olmstead observes:

“At Vassar, Elizabeth seemed uncomfortable among her rich, prestige-conscious classmates. She made few friends and took solitary bird walks at 5:00 A.M.”

Refraining from much of campus life, with the exception of a short period of time when she joined the Vassar chapter of the League for Industrial Democracy, a student organization that supported the ideals of socialism, Bentley nonetheless later blamed Vassar for inspiring her to turn to the Communist party.

After graduating from Vassar, Bentley continued her study of Italian on a fellowship to the University of Florence, where she briefly joined a fascist group.  She subsequently earned a masters degree in languages from Columbia University in 1933.  She later said it was her exposure to the negative effects of fascism in Florence, which “revolted” her and caused her to join a Communist party cell at Columbia in 1935.

“for three and a half years I was indoctrinated with all the Communist beliefs” and those “indoctrinations put blinders on me and I couldn’t see anything else.  They made a fanatic of me.”

In 1938, Bentley met and fell in love with Jacob Golos, a Russian-born American who conducted Soviet espionage through a Soviet-backed travel agency.  Eager to share her disillusionment with Italian Fascism in Italy so as to promote communism, she joined the American League Against War and Fascism, and in 1941 she became a courier for the Communist party.  Using the alias Helen Johnson she made weekly or bi-weekly trips between New York City and Washington, D.C., obtaining confidential documents and transporting them between the two cities.

She collected stolen government documents from 37 employees of government agencies and wartime boards.  She passed these on to Golos and Earl Browder, the general secretary of the Communist party in the United States, and they sent them on to Moscow.

Bentley later testified that she passed “a fabulous amount of confidential material” to the Russian communists.

“she told the Congressional investigators that she had received information on the production of aircraft and armaments, on a project to make synthetic rubber out of garbage and on the projected date for the invasion of Europe, among much else.”

After Golos’s death in 1943, Bentley’s interest in the party waned.  She took issue with its leader, Earl Browder, and she later insisted that when she left the party it was dominated by “gangster types” and that she was driven by “a good old New England conscience” to turn to the FBI.

“It was then,” she said, “that I realized where I stood.  Instead of serving the cause of humanity I was a tool for the enslavement of the people.  I decided this was my country and that it was a good country.  I felt I had been on borrowed time.”

In July of 1945, Bentley stopped paying her party dues, and in August she went to FBI headquarters in New Haven to admit her involvement with the party and offer her services as a spy.

Thereafter, she served as a double agent, continuing her work for the party while reporting back to the FBI.  When the Communist party gave her a commendation and $2,000, she immediately passed both on to the FBI.

Bentley’s counter-espionage was eventually responsible for the conviction of 11 Communist party leaders.  She testified publicly before House and Senate committees in the summer of 1948.  In an op-ed in The New York Times, historian Timothy Naftali asserted, “From the moment Elisabeth Bentley testified before the House Committee on Un-American Activities in July 1948, the hunt for Communists became a national obsession.”

Testifying before the House Committee

“The Alger Hiss case, the Smith Act prosecutions of Communist Party leaders, and Senator Joe McCarthy’s denunciations of State Department Reds all stemmed from Bentley’s decision to walk into that forbidding FBI office.”

Bentley also testified as a Government witness at the Rosenberg trials.  As one of the last major testifiers in that case, she has been blamed for being the ultimate cause of the Rosenberg’s conviction.

After leaving the Communist party and the FBI, Bentley converted to Catholicism.  She characterized her embracing of the faith as a resolution of her lost faith in the Communist party.  Bentley spoke about her involvement with communism and later her devotion to Catholicism as someone with an intense need to be a part of a cause to believe in and to which she could devote herself.  Bentley told the house Un-American Activities Committee:

“It never occurred to me that I was betraying my own government … The mistake you make when you look at communism is that you take it as an intellectual process.  It is not.  It is almost a religion, and it gets you so strongly that you take orders blindly.  You believe it blindly.  That accounts for the fact that no real communist is religious or has any religion.”

But Bentley also blamed her turn to communism on a deficiency of religious as well as political education, for which she held Vassar accountable.  Vassar, she said:

“had gotten me to the point where I was a pushover for communism.”

Speaking to some 1,400 Newman club students from six different universities in New York, she claimed, according to Kathryn Olmstead:

“she previously had adopted communism because of the materialism and widespread atheism encountered in her college years.”

“In 1934, when I met my first Communist, I was an agnostic and a pushover for any kind of a political philosophy.”

Although she didn’t take any courses in religion at Vassar, Bentley identified “this tendency in most American institutions of higher learning, toward dullness and stiffness in an all-important matter of the teaching of religion.”  She added that halfway through her freshman year, the college abolished compulsory chapel.

Bentley also said the educational institutions she attended had failed to provide her with sufficient education about American government.

“I think the fault runs straight through the educational system,” she said, “because there are so many people like myself who have not the slightest comprehension of what America is really like or what it means to live in a democratic country under a democratic system.”

Bentley’s disparagement of Vassar placed an evident strain on her relationship with the college.  When a reporter asked if she would be willing to speak at the college to defend her case, Bentley replied, “You bet your life I would.”  The Vassar College Newman club toyed briefly with the idea of inviting her to speak about her Catholicism, but according to the president of the club, Patricia Bloomfield-Brown ’50, “the college authorities would not permit” them to invite Miss Bentley to speak at Vassar.  In response to a question about her statements, a college spokesman stated simply that Vassar “declined to ‘enter into a controversy’” with Elizabeth Bentley.

In 1951, Elizabeth Bentley published Out of Bondage, an account about her involvement and disenchantment with the Communist party.  She subsequently toured the country, speaking on the same subject.  She eventually moved to a Catholic residence club for women in Connecticut and spent the rest of her life teaching high school languages for five years at the Long Lane School for Girls, a state correctional institution in the Middlefield, CT. until her death in 1963.